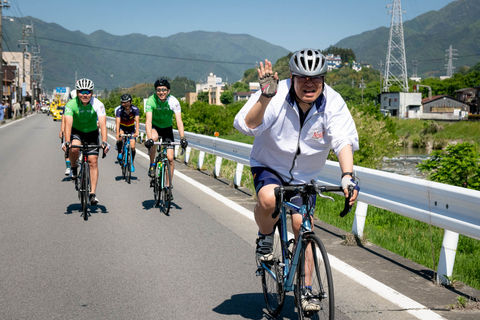 The 5th Stage or Minamishinshu Stage of NTN presents 2019 Tour of Japan came to Iida city, Nagano prefecture on Thursday, 23rd May.
The course is 123.6 km in total and the King of Mountain point is set at 561 meters above the sea level which is the highest point in the course.  After the technical winding and up-down course, many fans waited for watching the race at the so-called “TOJ Corner” which is a hairpin turn, one of the famous points in TOJ Minamishinshu stage.  After the hard circuit, mostly we see the bunch sprint from the mark of 1 km to go and the thrilling straight course design gives satisfaction to spectators near the finish. 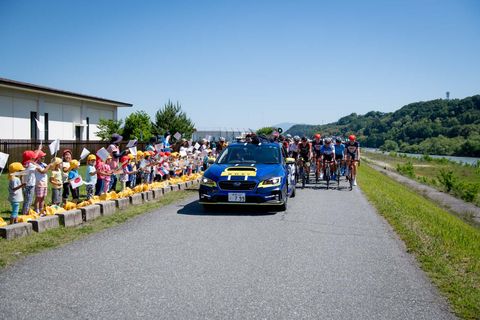 In the first lap, surprisingly nothing could be seen and from the second lap, Filippo ZACCANTI (NIPPO – VINI FANTINI - FAIZANé), Metkel EYOB (TERENGGANU INC.TSG CYCLING TEAM) and Atsushi OKA (UTSUNOMIYA BLITZEN) finally formed a breakaway and LJUBLJANA GUSTO SANTIC, the leader jersey team led and controlled the peloton like yesterday, in Mino stage. 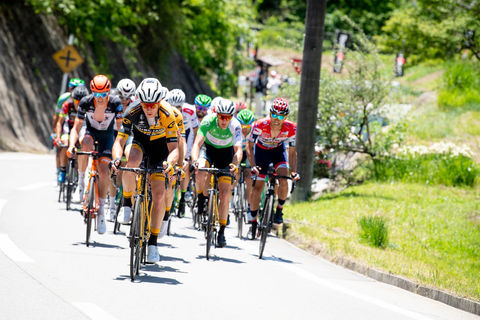 With 3-min time gap to the peloton, in the 3rd lap, the breakaway headed to King of Mountain point and Filippo ZACCANTI (NIPPO – VINI FANTINI - FAIZANé) crossed the line of KOM point first and got 7 points.  ZACCANTI was almost to confirm the Red Jersey in the 5th Stage and the break continued to work together to escape from the peloton. 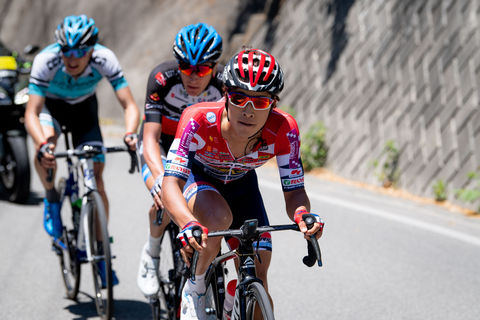 In the 4th lap, Emil DIMA (GIOTTI VICTORIA-PALOMAR) made a solo attack from the peloton, made to catch the breakaway with 3-min time gap at a breakneck pace and formed a 4-rider break.
In the middle of the race, 5th lap, TEAM SAUERLAND NRW P/B SKS GERMANY came up to the front of the peloton and increased the speed to start chasing the breakaway.  In the result, the time gap was reduced to two minutes and the break headed to the second KOM point.  Even reducing the time gap, the breakaway made to across the KOM point earlier than the peloton and Filippo ZACCANTI (NIPPO – VINI FANTINI - FAIZANé) again got 7 points as the first rider.  It means that ZACCANTI is almost to fix to win the General Mountain Classification.
In the 7th lap, when the time gap reduced to 1 minute, the speed of the TEAM SAUERLAND NRW P/B SKS GERMANY was decreased and instead, KINAN CYCLING TEAM which has the defending champion, Marcos GARCIA FERNANDEZ, started to lead the peloton and
the peloton could see the breakaway in the downhill after the KOM point.  From this moment, both the breakaway and main group started to make attacks.  Atsushi OKA (UTSUNOMIYA BLITZEN) solely attacked to escape from the peloton, so did Orluis AULAR (MATRIX POWERTAG) from the peloton.  After that, several solo attacks were seen by Robbie HUCKER (TEAM UKYO) and others.  Even though the breakaway was caught by the peloton, Atsushi OKA, Adrien GUILLONNET (INTERPRO CYCLING ACADEMY) and Drew MOREY (TERENGGANU INC.TSG CYCLING TEAM) again formed a breakaway with 40-sec time gap to the peloton and tried to escape from the main group.  First, OKA dropped from the breakaway and Adrien GUILLONNET also dropped at the KOM point of the last lap.  But at the TOJ corner in the last lap, solo breakaway, Drew MOREY was caught by the main group.
From the mark of 1 km to go, about 30 riders started bunch sprint in the long straight course to the finish, and it might have been too early to use the final card of TEAM BRIDGELANE’s perfect train and other teams also were pulled by their beautiful team line.  In the end, Federico ZURLO (GIOTTI VICTORIA-PALOMAR) took the first victory of TOJ for himself and the team itself.  Benjamin HILL (LJUBLJANA GUSTO SANTIC), Green Jersey wearer finished 4th, but has kept the leader jersey for tomorrow, Mt. Fuji Stage. 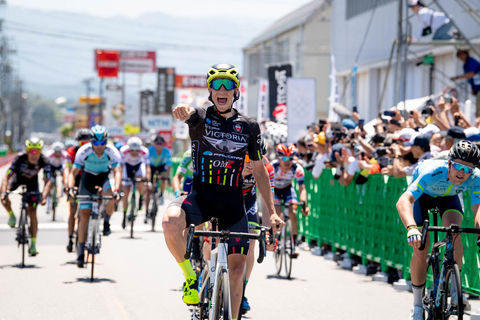 Federico ZURLO (GIOTTI VICTORIA-PALOMAR)
“For us, it was good, sure.  It was really a hard stage, because it was hot and there were too much corners with a little bit climb.  I concentrate to always stay in the front.  In the last lap, I think the front group was about 30-40 riders and less peloton, it was easier for me to win.”
Benjamin HILL (LJUBLJANA GUSTO SANTIC)
“That was a good day for us.  Our main goal was the time keeps the Green Jersey all the day.  And also it was a good stage for me to turn for the win.  I made it to stay in the front in the finish, but there was still a few guys in the spot and I was the 4th in the end.  The main goal was to keep the Green Jersey, so it was still a win for us.”
ニュース