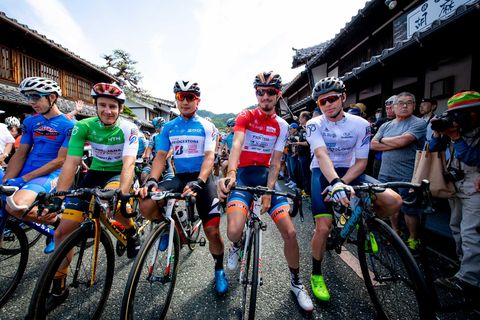 The 4th Stage of NTN presents 2019 Tour of Japan started from “Udatsu-no-Agaru-Machinami (Udatsu-lined Old Streets)” where is the most famous sightseeing spot in Mino city, Gifu prefecture on Wednesday, 22nd May.  “Udatsu” was a firewall slightly raised at both ends of a roof as a device to prevent fire.  Udatsu could be built only on wealthy houses.
The course of the Mino stage is 139.4km, the longest distance in the 2019 Tour of Japan and a circuit course in front of “Mino Washi Japanese Traditional Paper Museum”.
Four riders dropped from the race in the 3rd stage and 89 riders officially singed-on in the morning today.  Compared to the race yesterday, it is easier to guess that the bunch sprint to finish can been seen today, due to the flat course design. 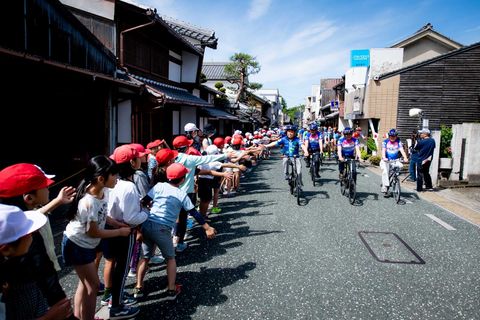 From the first lap, the breakaway was formed by three rider, Denis Marian VULCAN (GIOTTI VICTORIA-PALOMAR), Florian HUDRY (INTERPRO CYCLING ACADEMY) and Joan BOU COMPANY (NIPPO – VINI FANTINI - FAIZANé) and the time gap to the peloton was more than two minutes when they got into the second lap.  LJUBLJANA GUSTO SANTIC, Green leader jersey wearer team let the breakaway go and controlled the peloton with three-minute time gap.  Nothing happened until the 4th lap. 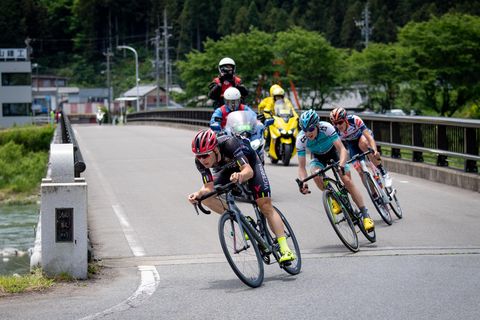 One each from TEAM UKYO and TEAM BRIDGESTONE CYCLING came up into the train of LJUBLJANA GUSTO SANTIC which was in the front of the peloton and the chasing speed of the peloton was gradually increased.  The time gap between the break and the peloton was shortened up to two minutes when the peloton passed the finish line of the 4th lap, and finally in the end of the 5th lap, the time gap was 35 seconds and the last lap race began.

In the mark point of 15km to go, the peloton caught the 3-rider breakaway, expanded side by side in entire two-car lane and another gamesmanship was begun for the finish.
Before the KOM point of the last lap, the speed of the race was increased and the main group was scattered and the line of the peloton got longer on the downhill.
In 1km to go, the bulk of the peloton looked like a gigantic creature and crowded into the finish line.  Finally, Raymond CREDER (TEAM UKYO) claimed a victory in a fierce bunch sprint.  Kazushige KUBOKI (TEAM BRIDGESTONE CYCLING) finished second and Orluis AULAR (MATRIX POWERTAG) finished third with the same time as CREDER.
Green Jersey wearer stays in Benjamin HILL (LJUBLJANA GUSTO SANTIC) with only one second time lead.  HILL will wear the leader jersey in Minamishinshu stage tomorrow. 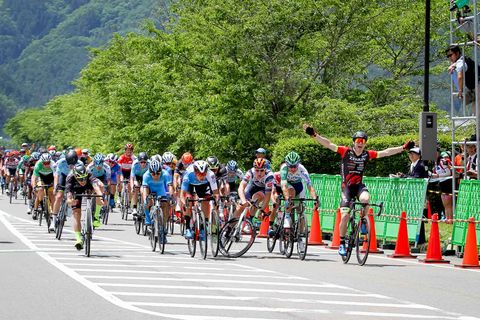 Raymond CREDER (TEAM UKYO)
“In the beginning, there was a three-rider breakaway.  That was perfect for us, because we decided to go for sprint for me.  After 40-50km, we forwarded one rider to the front to chase the breakaway down, finally team broke it for me to put me a good position
In a last k, I was really in a good spot to do much sprint 200 meters to go.
I was really happy to finish the goal after the great team work.”
Kazushige KUBOKI (TEAM BRIDGE CYCLING)
“We have heard that the leader team would control the race today and our team wanted to do the sprint finish and decided to work together with the leader team.  In the last, my position was really stressful and dangerous, but my teammate protected me and I could be in a good position.  I could not win the race again today, but have a confidence to say that my performance was good enough to get Blue Jersey today.”
ニュース