Atsushi OKA wins the individual time trial by impressive speed in the first stage in Sakai and grabs all jerseys on the podium.

RACE: NTN presents 2019 Tour of Japan Stage 1 SAKAI Stage
DATE: 2019.MAY.19.(SUNDAY)
Weather: Cloudy
Tempreture: 27℃
Number of Spectators: 77,000
NTN presents 2019 Tour of Japan (so-called TOJ) started as the highest category of stage race, UCI Asia Tour 2.1 class, in Japan.  The race made a start of individual time trial with 2.6km flat circuit course in the first stage of TOJ. About 77,000 people watched the race in Daisen Park, Sakai city, Osaka today, cheered the riders along the course and could get a close look at the impressive speed of the professional riders. 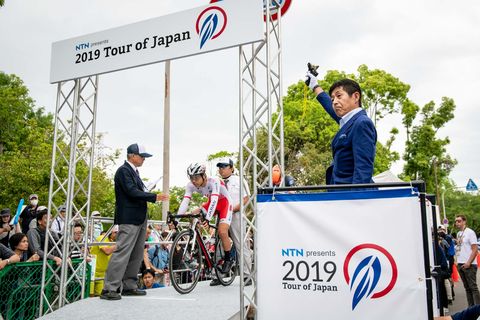 While a lot of people were watching, 96 riders of all 16 teams, one by one left the starting podium every 30 seconds.  In the beginning, Chris HARPER (TEAM BRIDGELANE) hit the best time by 3’10”58 which is faster than one of 2018 ITT winner and his teammate, Nicholas WHITE (TEAM BRIDGELANE) came close to his time, but no one could have beaten Chris HARPER.  In the last half of the race, the 50th start rider, Adam ŤOUPALIK (TEAM SAUERLAND NRW P/B SKS GERMANY) made his time ‘0”27 faster than Chris HARPER and took a TT hot seat.  From the knowledge or experience of the past races, most of people believed the time of 3’10”00 would be decisive, however, Atsushi OKA (UTSUNOMIYA BLITZEN) crossed the finish line with unbelievable speed, by 3’06”69 which was 3’62”00 faster than the top rider and more than 5 seconds faster than one of the 2018 ITT winner.  After OKA, the current Japanese TT champion, Kazushige KUBOKI (TEAM BRIDGESTONE CYCLING) finished by 3’07”28 and Orluis AULAR by 3’08”02 and both of them could not have beaten OKA’s time.

Atsushi OKA (UTSUNOMIYA BLITZEN) won not only the Green jersey or GC leader jersey, but also all other jerseys, such as Point (blue) and White (best young) jersey, and was only one stood on the podium.  While many people expects that 2019 TOJ will be very competitive, OKA and UTSUNOMIYA BLITZEN hold a leading position from the stage race tomorrow.
Atsushi OKA (UTSUNOMIYA BLITZEN)
“I have targeted to win the Tour of Japan this year, so that I am very happy to win the first stage.  I was in good condition today, feeling to achieve good result.  I did my best and am glad to win the race in the end.”