Returning after a two-year absence, the Tour of Japan takes place over three days and three stages. The first day, the Fujisan (Mt. Fuji) stage, is a tough course that runs up to the 5th station on the Fuji Azami Line after making four and a half laps which is a part of the Tokyo 2020 individual time trial course. 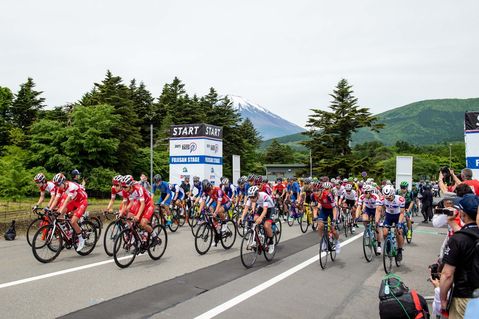 After the start, a neutral section up to 4.4km was followed by an actual start. The balance of the race was broken after 7km. Five riders responded to an attack by Daiki YASUHARA (MATRIX POWERTAG) and formed a breakaway group of six riders. The main group was controlled by UTSUNOMIYA BLITZEN, with a time gap of 48 seconds.

On the second lap, with the gap down to one minute, the peloton allowed the breakaway to go ahead, and the race settled down.

On the approach from the circuit to the Fuji Azami Line, the breakaway was caught by the peloton and headed straight for the grueling Fuji Azami Line hill climb which is 11.4km.

The main group seemed to start slowly, waiting for their rivals’ action, and became smaller and smaller every 100 meters. With less than 8km to go, the first rider who made an attack was the 18-year-old rising star, Yuhi TODOME (JAPAN NATIONAL TEAM). He began to open up a gap on the favorites, pedaling nimbly. In the chase group, Thomas LEBAS (KINAN CYCLING TEAM) seemed to get tired of chasing, followed by Nariyuki MASUDA (UTSUNOMIYA BLITZEN) who also made a move to catch him. They caught up with Yuhi TODOME (JAPAN NATIONAL TEAM) with 5.5km to go and the race finally came down to a battle between LEBAS and MASUDA.

When MASUDA went ahead, LEBAS passed him back and went ahead again in a battle of wills. With 1.3km to go, Nariyuki MASUDA was the first to make a move, and he kept pedaling with all his might to take a convincing victory by 11 seconds over Thomas LEBAS. 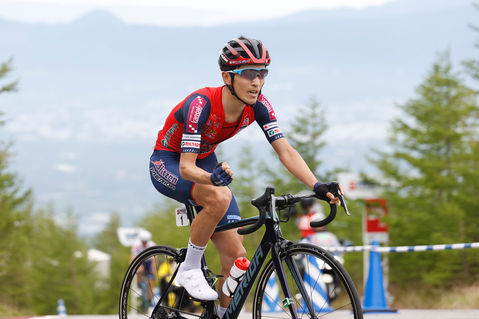 “I was competing with Thomas in the last today and I felt that it would be more difficult for me to win. I was hoping that I could make a move at the finish of the last hill, but when the gradient was not too steep, Thomas pulled away and I took a chance and he pulled away. From there I pedaled as hard as I could. My teammates did a great job, and everyone was happy with team effort to get the win.”

“It was my first time participating in this race which I've always wanted to race. I tried to do the best I could. It's my starting year in the U23 category, so I was determined from the start to keep the white jersey. I also want to ride well tomorrow and the day after to be part of the GC top group.”