The Sagamihara Stage, the second day of the Tour of Japan, is a brand-new stage and uses part of the Tokyo Olympic road race course. Sagamihara City is located in Kanagawa prefecture and about 1 hour away from the central Tokyo. The stage started with a ceremonial run from the city center around Hashimoto station, and the riders raced around the Toriihara Fureai no Yakata for 7 laps, where there was a fierce battle for the GC. 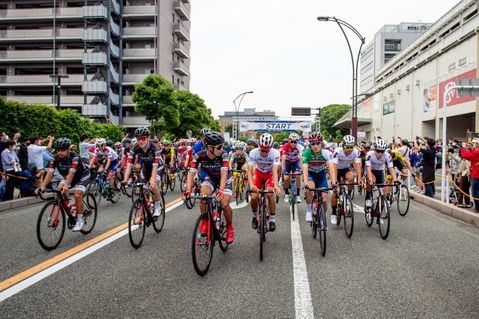 From the start of the neutral section of 4.6km, the actual start was from Ogura Bridge, a scenic spot in Sagamihara City. The several attacks on the approach section to the circuit were not decisive, and the pace of the peloton continued to accelerate after entering the circuit.

As they approached the climb from the right turn at the entrance to the Miyagase Dam, a breakaway of 16 riders finally formed and by the time they crossed the first control line they had built up a time gap of around 1 minute 30 seconds to the main group.

Shotaro IRIBE (YOWAMUSHI PEDAL CYCLING TEAM) and Kosuke HIRAI (JAPAN NATIONAL TEAM) collaborated to attack together from the breakaway for a long spurt but were caught up by the original breakaway at the end of the 5th lap.

However, with two laps to go, this attack had destabilised the breakaway and they repeated attacking in small bursts and kept the rivals in check. It seemed all of the front group started to think about the escape.

At the same time, the main group was still led by UTSUNOMIYA BLITZEN, but the gap was reduced to 4'50" and the pace gradually increased. It was already difficult to catch the breakaway group, but UTSUNOMIYA BLITZEN and KINAN CYCLING TEAM were determined to close the gap as much as possible, as it would affect the GC ranking. By the end of the sixth lap, the peloton had closed the gap to 3'10".

From the breakaway on the final lap, Yuma KOISHI (TEAM UKYO SAGAMIHARA) made a solo attack, looking for a stage win and come-from-behind GC win. He was on his own till the last 5km, but Jose Vicente TORIBIO ALCOLEA (MATRIX POWERTAG) and Genki YAMAMOTO (KINAN CYCLING TEAM) caught him up. With 2km to go, two riders behind caught up and five riders were in the final battle.

Naruyuki MASUDA (UTSUNOMIYA BLITZEN) finished 1'36" behind the winner, but this did not affect his position and he kept Green Jersey heading into the final stage in Tokyo. 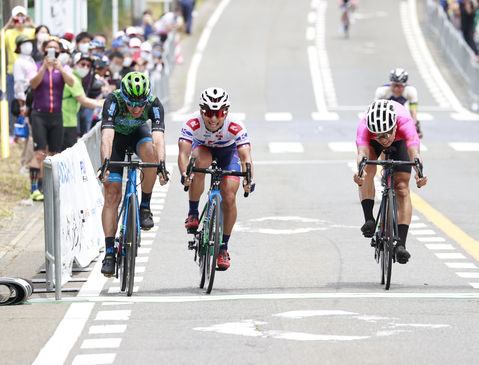 “The conditions were better than yesterday, and we had a good time gap to the peloton, so I thought I had a chance today. But I didn't know if I could win until the very end. I was free to move today, because the time gap to the top was pretty big.”

“I think we managed to keep the Green Jersey today. To be honest I thought it was going to be tough because of the time gap, but the teams with the same interests started to work together and we were able to defend the leader's jersey. This year the TOJ was shortened to three days, but we are happy that we can participate in the UCI race. We will be defending the leader's jersey as a team on the last day, so please keep supporting us.” 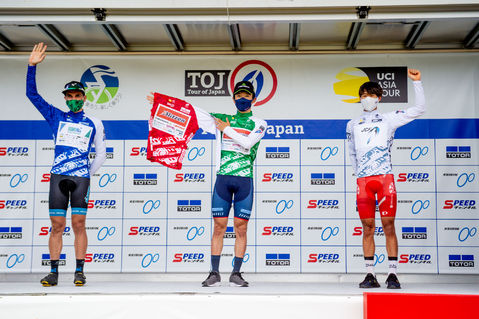